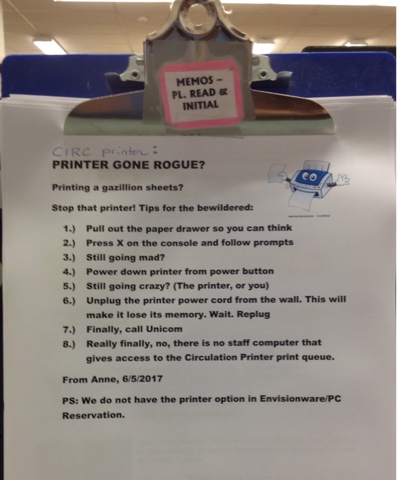 How would any organization run efficiently without the time-honored memo? Here at the library, each department has a memo clipboard and the staff table is littered with memos. Today's memo concerns the main printer which the public computers print to. The big printer had a hissy fit over the weekend and we apologize to any patrons who did not get their printouts on Sunday. On Monday morning, the printer spat out all those homework assignments and other things you needed so badly the day before. Again, we apologize. This called for a memo. Sometime printers just like to hoard printouts, only to regurgitate them later en masse. Sometimes printers like to chew up paper and get all jammed up. Sometimes printers only print in black and white, or, as with ours a few months ago,  print everything with a jaunty slash of pink ink. We cured the printer of the pink problem. It doesn't jam if we only feed it the exact kind of paper it likes. But sometimes, it still hoards. We could read it Marie Kondo's 'The Life-changing Magic of Tidying Up,' but you know, printer storytime would only mean we had let the printer win by driving us totally into fantasy land. Printers can do that. Remember the scene from the movie 'Office Space' where the cubicle dwellers take the bad printer outside and beat it to death? Watch that scene on You tube here

The library staff did not smash the printer to smithereens with a baseball bat. We wrote a memo. By the way, not so long ago there were no printers in libraries, only clay tablets and little reeds to make wedge-shaped marks. It's true, you needed a strong arm and a sturdy book bag to take home your borrowed clay tablets, but they never jammed up :-)

For more thoughts on memos from our blogger, go to Memo Memes: Passive Agressive Memos at the library