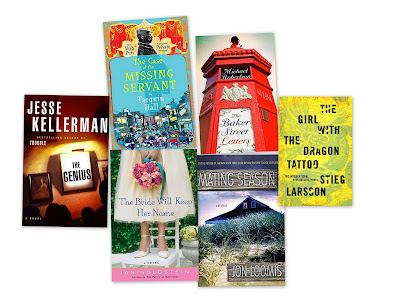 The Genius by Jesse Kellerman
The son of Faye and Jonathan Kellerman is a great thriller writer in his own right. An art dealer takes the boxes of drawings that a dead artist has left behind, and finds a drawing depicting a boy who was murdered 40 years ago.

The Case of the Missing Servant by Tarquin Hall is being compared to the No. 1 Ladies' Detective Agency books by Alexander McCall Smith. From the annotation: "Vish Puri styles himself as the best private investigator in India. His main gig is running background checks, but bigger, more sensational cases are coming his way."

The Bride Will Keep Her Name by Jan Goldstein
The manager of a New York art gallery finds out the week of her wedding that her otherwise perfect fiance, a TV journalist, may be involved in the murder of an escort girl. Perfect for those who loves mysteries and chick lit.

The Baker Street Letters by Michael Robertson
Two brothers who are lawyers lease offices on Baker Street and begin to receive letters addressed to Sherlock Holmes. One sent 20 years earlier leads them to LA. Reviewers love the characters.

Mating Season by Jon Loomis. In Cape Cod, Detective Frank Coffin has to overcome his panic attacks while looking into the murder of a woman who had affairs with everyone in town. You might want to start with the first book in the series, the critically acclaimed High Season, which is about the investigation into the murder of a TV evangelist - with the murderer definitely still in town.

The Girl with the Dragon Tattoo by Stieg Larsson. This is the first in a trilogy everyone's talking about, a European blockbuster from an author who died shortly after its publication . . From the book's annotation: "A crusading journalist joins forces with a 24-year-old pierced and tattooed genius hacker to investigate a missing woman from one of the wealthiest families in Sweden."
Posted by Ellen at 7/21/2009 09:07:00 AM

You can find these books on my bookshelves too. They are very well written...a true delight !