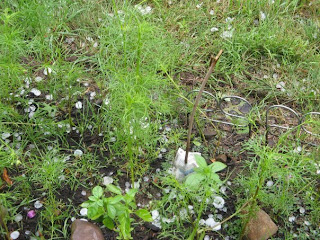 Yesterday afternoon, here in Central Jersey, the wind kicked into high gear, torrents of rain blew sideways and hailstones as big as the proverbial golfball (ok- small golfballs) clattered on the roof and blanketed the ground - sending my dog under the bed and me running around shutting windows and mopping windowsills. The lights went out and, as I found out this morning, the library computers would have hid under the bed if they could have. They sent the Monday morning staff complicated error messages instead. They just wanted to be rebooted and soothed and then all was well with the library Circulation system.
Extreme Weather, a guide & record book by Christopher C. Burt (551.5 BUR) tells us that Cheyenne, Wyoming has the most hailstorms per year (9 - 10 days) Cheyenne dogs must spend a lot of time under beds. Mr. Burt also points out that the higher the cloud, the bigger the hailstone produced. High Plains cumulonimbus clouds can top 50,000 feet and "are capable of producing monstrous hailstones the size of softballs.) (p. 158) Yikes!
And finally, on page 159 there is a photograph of the largest hailstone "ever to be officially measured" - seven inches in diameter. It fell in Aurora, Nebraska, June 2003 during "tornadic thunderstorms." So, fellow Jerseyans, and Jersey dogs, it could always be worse.
Picture: my newly blooming Cosmos and Basil covered with hailstones, but still standing.
Posted by Anne at 7/27/2009 09:50:00 AM

After reading this post, several people have kindly inquired about my garden: did my beans survive the hail, or as Ellen suggested, had I managed to kill them all by myself without divine intervention in the form of hailstorms, locusts whatever? Yes, the bean plants are fine and will live on to produce at least another half-dozen beans I expect. Hope springs eternal for gardeners. Otherwise, we would just pave it all over and head for the supermarket.