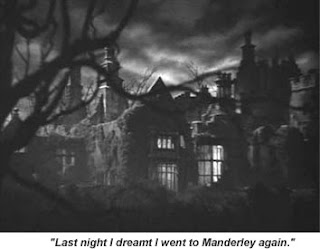 The library book group is meeting tomorrow, July 2 at 10:30 a.m. to discuss Daphne du Maurier's classic novel, Rebecca. I think I speak for all libraries when I beg publishers to please reprint this in hardcover (last done in 1938 and even the last paperback edition is entering its teenaged years).

Maybe I just read too much Rosamunde Pilcher in my youth, but I love any book whose characters have tea outdoors and mansions overlooking the sea. It's one of those classics which is actually fun to read and I would recommend it to anyone who liked Pride and Prejudice or Jane Eyre, although it's set in the 20th century. (But really, an era in which lady's companions can have a whirlwind courtship and marriage during a holiday in Monte Carlo seems equally remote in time.)

Marilyn of book group fame has run circles around me in her Rebecca research, for which I am very grateful, and she found discussion questions at Indusladies.com, LitLovers, and 1001 Books for Every Mood. And here's one of my own: What would have happened if Rebecca's cousin Favell hadn't been out drinking that fateful night?

Daphne du Maurier based Manderley on Menabilly, a dilapidated estate in Cornwall which she leased and restored in the 40s. You can see another photo here. Du Maurier wrote about how she discovered Menabilly, and her fascination for it, in "The House of Secrets" in The Rebecca Notebook.

She was accused of plagiarizing Caroline Nabuco's La Succesora, which was published in Brazil in 1934. La Succesora was never printed in English and even the French translation of La Succesora is impossible to get your hands on, so I can't speculate. But what the New York Times reported on it is interesting.

Alfred Hitchcock made the film version of Rebecca, and it won the Academy Award for Best Picture in 1940. There's an interesting explanation of why the Motion Picture Production Code made Hitchcock change important parts of the plot (but don't read it if you don't want the ending of the book spoiled) here.

Daphne du Maurier was the granddaughter of George du Maurier, the author of Trilby, an 1894 novel about a hypnotist named Svengali who turns a laundress/ artist's model into a famous singer. It was as well known as Dracula by Bram Stoker and the Sherlock Holmes novels by Arthur Conan Doyle.
Posted by Ellen at 6/30/2010 05:09:00 PM