Library Exhibit on Illustrator Will Crawford of Free Acres

In honor of the Free Acres' 100th anniversary, the drawings and carvings of Will Crawford, an illustrator whose work appeared in Saturday Evening Post, Colliers and Life, are on exhibit at BHPL until July 22. Will Crawford was a resident of Free Acres in Berkeley Heights from 1918 until his death in 1944, and the log cabin he built still exists. The library display includes Crawford’s pen and ink illustration “Civil War Carnage,” which was an illustration for fellow Free Acres resident MacKinlay Kantor’s Civil War novel, Long Remember, published in 1937. Kantor went on to win the Pulitzer Prize for his novel Andersonville in 1956. 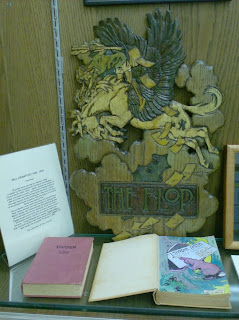 Also on display are the Free Acres mailbox sign carved by Crawford, and “The Flop,” a carving Crawford made for his Free Acres neighbor Thorne Smith in 1926. The name of the carving refers to the fact that Thorne Smith had mentioned to Crawford that he was sure that his next novel, Topper, would flop. Topper went on to be one of his most successful works and was made into a movie in 1953. The art and books on display were loaned by Steve Schade and Thorne Smith’s grandson, Terry Conner.
Posted by Ellen at 7/06/2010 12:00:00 AM