Animal, Vegetable, Miracle is a book that somewhat resembles the "vegetannual" plant that novelist Barbara Kingsolver imagined to help you remember what's in season. 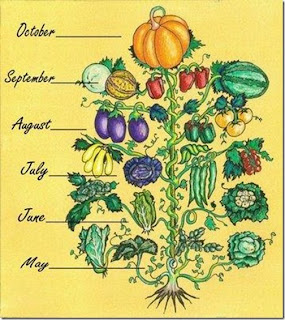 At its roots it's the narrative of the year in which she and her family ate nothing but local food, mostly grown or raised themselves. But it's also an indictment of industrial agriculture (via sidebars written by Steven Hopp) and a reasoned look at what is actually good for the environment (like eating heirloom turkeys - the kind that can actually walk & are smart enough to know how to reproduce on their own - raised locally, vs. eating tofu made from soybeans shipped thousands of miles). Also scattered through the book are essays by Kingsolver's daughter Camille reflecting on the experiences of growing up locavore, and her seasonal meal plans, with the recipes linked to the Animal, Vegetable, Miracle web site.

Here are my thoughts on the book:

-It's not preachy, but may induce eye-rolling. The sheer amount of work that the Kingsolvers do in order to eat locally, all the while extolling its virtues, will turn off the average harried supermarket shopper. (Imagine them saying: "I just spend an hour and $100 - I even bought Cheerios and organic apples - so I could feed my family all week, and you're telling me that isn't healthy enough & bad for the environment?!") The book does assure you that it isn't necessary to do this work yourself; just go to the farmer's market, and start asking the restaurants you go to if they buy locally.

-On the other hand, if you bake your own bread and make your own cheese, then simple dinners like bread, cheese & a salad from the garden would taste great and take no time at all to put on the table. Even if you are downright suspicious about people who want to "save the earth," eating locally tastes really good. And meal planning is much simpler if you buy what's in season and then use seasonal recipes, rather than picking a random recipe at home first, then stressing out when even the grocery store doesn't have cabbage or green onions that week.

-If you are interested in being environmentally friendly, but could never give up meat, you'll be happy to read why eating grass-fed, free-range meat is good for the environment & even necessary in some of the world's harsh climates.
Posted by Ellen at 7/24/2010 08:06:00 AM

I can't help but think of the New Providence turkey which hangs out on Springfield Avenue. He would be local enough, wouldn't he? om nom nom...