The Case of the Sibling Sleuth

Enola ("alone spelled backwards," the lonely protagonist informs us) Holmes is the 14-year-old sister of Sherlock Holmes in this mystery series by Nancy Springer. After her mother abandons her to go roaming with gypsies (but not without leaving her serious amounts of cash & a flower-based code to communicate with her via the classifieds of the Pall Mall Gazette) Enola must flee the clutches of her clever older brothers, especially Mycroft, who does not approve of her unwomanly activities, such as bicycle riding. Under a false name she establishes herself as "the world's first scientific perditorian," or finder of lost things and people, in London. 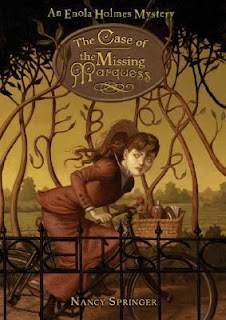 This is a young adult mystery series, but if you like codes, all things Victorian, and spirited, independent female protagonists, give it a try. At only 200 pages or so they go quickly. The cases are solved with the help of coincidence here and there, but the dialogue and characters more than make up for that. I'm up to the fourth book (out of six), The Case of the Peculiar Pink Fan, and the series hasn't flagged yet. Begin with The Case of the Missing Marquess.
Posted by Ellen at 11/22/2010 01:26:00 PM