I picked up A Version of the Truth by Jennifer Kaufman and Karen Mack for some light reading, and now I'm interested in birds, of all things. (My new motto is "birds: not just carriers of avian flu anymore.") A Version of the Truth is about the transformation of a 30-year-old California woman from a dyslexic high school drop out and wildlife refuge volunteer (with a penchant for wearing beige and terrible taste in men) to a creative, put-together college grad and mother. What sparked the change was her new job as a secretary in the psychology department of a research university, but she lied about having a college degree in order to get it. 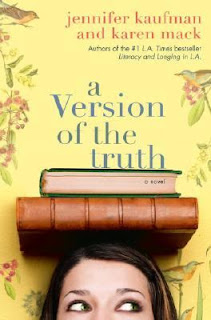 A Version of the Truth is chick lit, but it also examines the nature of truth and has great literary references. Cassandra's hippie mother named her after a Greek goddess who had the power to predict the future, but was cursed in that no one would believe her. Similarly, Cassie likes to visit the practically extinct ivory-billed woodpecker deep in a state park in the Santa Monica mountains, but no one at the university believes her. (Discussion questions are available on the book's website.)

Kaufman and Mack cited The Race to Save the Lord God Bird by Phillip Hoose as one of their sources for information about the ivory billed woodpeckers. I love nonfiction that was written for children (grades 5 - 8 in this case, although at BHPL the book is upstairs in adult nonfiction) so I checked it out. The Race to Save the Lord God Bird is full of photos, drawings and really interesting sidebars (such as, James Audubon thought the Bald Eagle tasted like veal.) It's a wide-ranging 160 pages or so, and an interesting look at American History as it affected birds (such as the Plume War of the early 1900s and the Southern logging boom during Reconstruction). 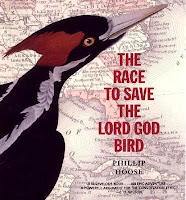