The recent news about the "new austerity" in the UK reminded me I've been meaning to read David Kynaston's book, Austerity Britain, 1945-51. Sadly I didn't even realize what life after the war was like there until I read the letters written to Helene Hanff in 84, Charing Cross Road ("Everyone was so grateful for the parcel. My little ones (girl 5, boy 4) were in Heaven - with the raisins and egg I was actually able to make them a cake!") Kynaston takes ordinary people's stories and ties them in to the major events of the day, albeit in 692 pages. 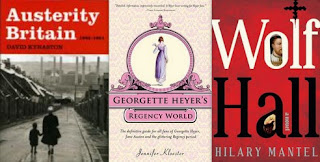 Then, Georgette Heyer's Regency World by Jennifer Kloester caught my eye from its perch on the shelf for new books at BHPL. It's an illustrated guide to upper-class life during the early 19th century. Publishers Weekly says it addresses everything "from the inside-out details of period costume to the different methods of harnessing horses to carriages and the proper method of table service".

But the book that I actually checked out is the historical novel Wolf Hall by Hilary Mantel, the 2009 Booker prize winner. In case you've been living under a rock, this is the gist of the book:

In 1520s England, the Tudor Dynasty is threatening to unravel. King Henry VIII has yet to produce a male heir in twenty-year-marriage to his first wife. However, his pursuit to annul his marriage and court his wife's lady-in-waiting, Anne Boleyn, threatens the stability of all of England and sets forth a chain of events that alters the course of history.