Topper: Far from a Flop

Topper got added to my "to read" pile last July, when Free Acres in Berkeley Heights had its 100th anniversary. BHPL had an exhibit on Free Acres resident and illustrator Will Crawford that included this sign, The Flop:

Crawford carved it for his neighbor, Thorne Smith, who in 1926 was sure that his comic novel Topper would be a flop. But it actually became his most famous book. In 1937 Topper was made into a movie starring Cary Grant, and then it became a TV show from 1953 to 1955 starring Leo Carroll, Robert Sterling and Anne Jeffreys. 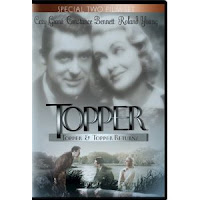 Topper lives on Glendale Road (there's one in Summit, although it's impossible to say for sure which New Jersey town Topper is from) and leads a boring, upright life, commuting to New York by train every day. A midlife crisis spurs him to buy the restored automobile formerly owned by George and Marion Kerby, a fun-loving couple who died when the car hit a tree. Topper's wife finds the car flashy and wants nothing to do with it, which is probably for the best since Topper is a terrible driver and the car is haunted by the ghosts of George and Marion.

George and Marion can physically materialize and dematerialize at will, which leads to many comedic scenes, notably when Topper, George and Marion get into a fight with the locals at a pharmacy and the following courtroom scene. I downloaded it onto an iPod from ListenNJ and found it amusing, but you'll need to make some allowances for the fact that it was published 85 years ago.
Posted by Ellen at 8/08/2011 03:28:00 PM