I enjoyed The Art Detective so much that I kept reading in the same vein, this time Harvey Rachlin's Scandals, Vandals and da Vincis. This "gallery of remarkable art tales" tells the story behind 26 famous paintings.

The first chapter is about the Mona Lisa, its horrifying theft from The Louvre on August 21, 1911 (nearly 100 years ago exactly!) and why Leonardo would never part with it, even though it was a commission. 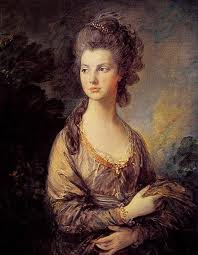 The Honourable Mrs. Graham (seen above) by Thomas Gainsborough also has a fascinating story behind it. Mary Cathcart was the daughter of an earl who was the English ambassador to Catherine the Great's court in Russia. She and her husband Thomas Graham led a happy life, until the tragedy that befell the Grahams caused Thomas to never want to see the portrait again. Then, at the age of 42, he began a brilliant military career that eventually led him to be named to the peerage as Baron Lynedoch. 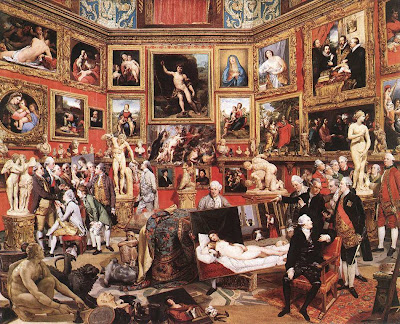 The Tribunal of the Uffizi, which depicts the gallery of the Uffizi palace in Florence, is an amazing painting by Johann Zoffany. Scandals, Vandals and da Vincis describes the intense personal losses Zoffany suffered as a result of accepting the commission.