Every January when I start reviewing the previous year my mind starts to spin. Will I morph into Tony DiNozzo from NCIS and start spouting movie titles or will I revert to my years as a Children’s Librarian and think in terms of fairy tales? The winner for 2011 is any easy choice – Clint Eastwood’s The Good, the Bad and the Ugly.

Before starting the narrative, here are the basics: *

*The Children’s Department was closed for 10 weeks, decreasing circulation and purchasing

Ugly is the only adjective to describe what Tropical Storm Irene left behind in the Children’s Department. Instead of celebrating the third anniversary of the renovation, we were hiring a restoration company to pack the books, remove the carpet, sanitize, anti-microbialize, remove drywall, and install large fans and dehumidifiers. It was over two and a half months from the first drop of rain until the second Grand Reopening.

Good, fortunately, outweighs the Ugly. In fact, so much good happened that it is necessary to create the following list:

Strategic Plan: The Board of Trustees, with input from focus groups, created and implemented a plan for the next three years.

Environmental Commission: In the spirit of cooperation, BHPL and the EC combined forces in April to provide adult and children’s programs focusing in environmental issues.

Downloads: Although this area of library service continues to evolve, BHPL offers both e-book and audio-book downloads. This is a growing collection, accessible online.

Boopsie: Boopsie is wonderful! In late 2011 BHPL’s Android app became available, followed by the Apple app in early 2012. Patrons can now use their smart phones to access BHPL’s collection, databases with apps, reserve books,
check your account, and view the calendar.

Volunteers: Over twenty-five volunteers helped to return the book collection to the Children’s Department after the storm related repairs. This group worked hard and went home tired after a long week of unloading boxes, pushing book carts, and arranging books on the shelves. Thank you to everyone who stepped up to help.

Children’s Department: The reopening of the Children’s Department in mid-November was the biggest accomplishment of 2011. If possible, the second reopening eclipsed the total renovation in 2008. The bright new carpet and brighter colors in the stairway signal to everyone that a good time can be had. The addition of lovely artwork above the Circulation Desk and near both computer locations adds a touch of whimsy.

In conclusion, the artwork above the downstairs Circulation Desk sums up 2011:

Once upon a time…they lived happily ever after.

The aggravation, angst, and weather calamities are neatly described by "..." , the spaces between the once and the ever after. 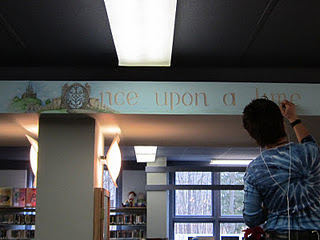