Batman Display at the Library

Cardwell Vaughn is displaying selections from his Batman collection at the library through the end of June.  Vaughn started collecting Batmobiles in 1998.  His collection has expanded to include artwork, books, statues and figures.  The exhibit includes Batmobiles, Batman and Robin, Batman artwork, cards, books and even the villain Bane. 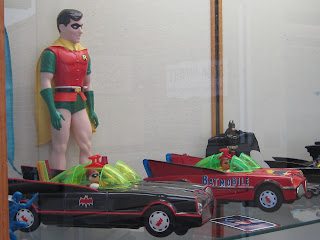 The Dark Knight of Gotham City first appeared in issue #27 of Detective Comics in 1939.  Over the years, he has been drawn by a number of different artists. Batman & Robin have been featured in comic books, graphic novels, merchandise and movies, and their adventures have taken place in the past, present and future.
Posted by Ellen at 5/31/2012 12:49:00 PM