Bill Cunningham New York is the documentary about the octogenarian photographer you may know from his weekly feature in the New York Times, On the Street.  Cunningham is a very private person and it took the filmmakers years to get him to agree to the documentary.  In the 1950 he was a milliner to stars like Joan Crawford.

In the 60s, after women stopped wearing hats, and a friend gave him a camera, Cunningham started taking photos of people in public in New York.  He's saved the negatives of all of his photos in the filing cabinets that fill his one-room apartment in Carnegie Hall. 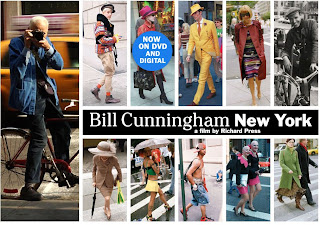 Cunningham rides a bicycle to get around New York. He rides without a helmet, at night and in the rain, often snapping photos at the same time, and this fearlessness is one of the freedoms that living an unconventional (and by American standards, monkish) life has given him.  Having his bike stolen 28 times hasn't stopped him, either: he's on his 29th.  You can place a hold on the DVD here.
Posted by Ellen at 5/18/2012 08:05:00 AM