Some readers love huge, open-ended novels whose meaning can be debated with their book group, historical fiction in which history and invention are entangled together. I'm not that adventurous. What I'm really loving now is Mr. Langshaw's Square Piano by Madeline Goold. This is a short nonfiction book that tells the story of a Broadwood "square piano" (one of the early piano fortes) which Goold discovered in a severely neglected state at an auction. 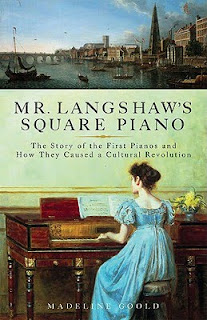 While her piano is being restored, Goold traces its history in the Broadwood family archives back to Mr. Langshaw, a music teacher in the north of England. Pianos were becoming accessible to all social classes in the early 1800s; Broadwood ledgers show pianos being sent to marchionesses, military men and women with suspiciously fake names like Mrs. Go to bed (brothel owners, perhaps? Goold doesn't say.) I haven't quite gotten to the story of Mr. Langshaw yet. He studied in London with Charles Wesley, the younger brother of the founder of the Methodist religious movement. There is also a good bit on the history of the Broadwood family.

The book's website has sound clips of music of the time being played on Mr. Langshaw's newly restored piano. You can also look at photographs, portraits and primary documents like one of Mrs. Langshaw's grocery lists.
Posted by Ellen at 2/09/2010 09:08:00 AM