The Stolen Child by Keith Donohue

On Friday the library's morning book group is discussing The Stolen Child by Keith Donohue. The book follows the lives of Aniday (a boy who was stolen by a band of hobgoblins and then lives in the woods as one of them) and Henry Day (the changeling who takes his name and place in the world). Henry Day is on a search for his real self, trying to remember a century earlier before he was kidnapped by the hobgoblins from his German-speaking parents. Donohue, whose Ph.D. is in modern Irish literature, was inspired by William Yeats' poem The Stolen Child,

Come away, O human child!
To the waters and the wild
With a faery, hand in hand,
For the world's more full of weeping than you can understand. 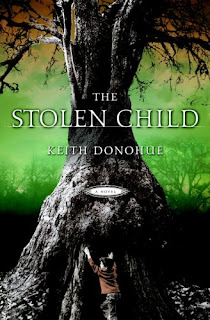 This sounds all very Harry Potterish, but it's only fantasy in its premise. It's more literary fiction, as we watch Henry grow up in America during the 50s, 60s and 70s.

In Donohue's interesting interview with Bookbrowse, he noted that the changeling myth probably originated with parents of children with birth defects who were in denial that the child could really be their own.

Discussion questions for The Stolen Child can be found on the Random House website.

Keith Donohue's website has a synopsis and reviews of The Stolen Child.