Cleaving: a Story of Marriage, Meat and Obsession by Julie Powell

Perhaps you've seen Julie and Julia, the movie Nora Ephron made out of Julie Powell's book about making all of the recipes in Mastering the Art of French Cooking in one year. If so, you probably think of Julie as sweet and happily married, like so: 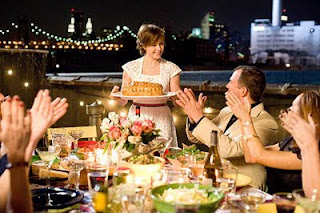 Um, you might want to toss that picture out the window. In fact, I suspect Cleaving was Julie's horrified reaction at being typecast as a romantic comedy heroine by most of America when she is actually one of those blogger-foodie New York hipsters.

Cleaving is about the Julie's months of apprenticeship as a butcher in upstate New York, followed by an around-the-world trip to Argentina, Ukraine and Tanzania to study their local meat and butchering customs.

While she's cutting up animals and getting covered in "schmutz" and blood, she reflects on her two year affair & obsession with a man who isn't her husband. Her marriage to her high school sweetheart stifles her, but is such an essential part of her that she can't leave it. Hence the title of the book, Cleaving, which means two contradictory things at once: "to separate" and "to hold together and resist separation." (Thanks, Visual Thesaurus.) Plus, it's what butchers do. It's the most perfectly titled book ever.

I enjoyed rooting for Powell to find an apprenticeship, the banter between her and her fellow butchers at the butcher shop, the details of the butchering process (the parts that didn't gross me out, at least) and the round-the-world trip to find herself in the second half. However, some of the book is tough to read - her obsession with her former lover and what sounds like masochism. Take that, Nora Ephron.
Posted by Ellen at 10/16/2010 10:03:00 AM