The Double Bind by Chris Bohjalian

I've wanted to read Chris Bohjalian ever since I heard him speak at a library conference in 2008. He admitted to folding laundry while talking on the phone to book groups, which won a place in my heart (the fact that he's so accessible to book groups, of course. Don't all men fold laundry?) 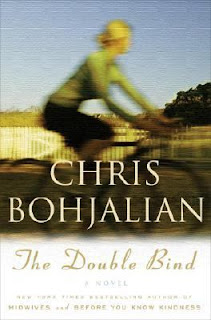 The other reason I wanted to read The Double Bind is because it's shot through with F. Scott Fitzgerald's The Great Gatsby. I still get shivery when I read the end of The Great Gatsby:

And as I sat there brooding on the old, unknown world, I thought of Gatsby's wonder when he first picked out the green light at the end of Daisy's dock. He had come a long way to this blue lawn and his dream must have seemed so close that he could hardly fail to grasp it. He did not know that it was already behind him, somewhere back in that vast obscurity beyond the city, where the dark fields of the republic rolled on under the night.

Gatsby believed in the green light, the orgastic future that year by year recedes before us. It eluded us then, but that's no matter--tomorrow we will run faster, stretch out our arms farther. . . . And one fine morning----

So we beat on, boats against the current, borne back ceaselessly into the past.

The heroine of The Double Bind is a young social worker who used to swim at a Long Island country club that was formerly Jay Gatsby's estate. Then one of her homeless shelter's clients dies and leaves behind old photos, including some of Daisy's house.

The Double Bind is like a box that you can't neatly shut when you've finished reading it. You'll find yourself flipping through it again, realizing there's more layers to the story to discover.
Posted by Ellen at 10/13/2010 04:49:00 PM