In July of 1967, 26 citizens of Newark died after the police beating of John Smith, a black cab driver, ignited 6 days of rioting. It was one of the most deadly racial disturbances on a per capita basis in U.S. history. On Tuesday, October 26 at 6:30 p.m., BHPL will screen an award-winning documentary, Revolution '67, which not only reconstructs the riots but goes back into Newark's history to discover its roots. Revolution '67 was selected for the PBS documentary series P.O.V. and attracted more than a million TV viewers when it aired earlier this year.

From the POV site:

Revolution ‘67 reveals how the disturbances began as spontaneous revolts against poverty and police brutality and ended as fateful milestones in America's struggles over race and economic justice. Voices from across the spectrum — activists Tom Hayden and Amiri Baraka, journalist Bob Herbert, Mayor Sharpe James, and other officials, National Guardsmen and Newark citizens — recall lessons as hard-earned then as they have been easy to neglect since. 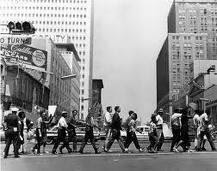 Revolution '67's filmmakers, Marylou Tibaldo-Bongiorno and Jerome Bongiorno, will attend the screening at BHPL. Dr. Mark Krasovic, the Geraldine R. Dodge Postdoctoral Fellow at Rutgers-Newark's Institute on Ethnicity, Culture and the Modern Experience, will lead a public discussion afterward. This program is funded by the New Jersey Council for the Humanities, a state partner of the National Endowment for the Humanities, through its series "Justice: a Dialogue Through Film."

This program is free and open to all. Registration is recommended. Light refreshments will be served.