Switch by Chip and Dan Heath 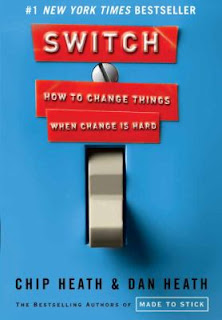 Change is usually thrown around with two of my least favorite words - "empower" and "embrace". But Switch: How to Change Things when Change is Hard was a refreshing change from the blathering that I feared. The basic premise is that you can harness the strengths of your rational side, your emotional side, and your environment, depending on which is most useful in achieving your goal. The authors call this "directing the rider," "harnessing the elephant" and "shaping the path." The tone is light and the authors tell the stories of both individuals and corporations who have made major changes that stuck, thrown in with lots of interesting psychological studies. You can read excerpts here.

One of the most inspiring stories was the case of Save the Children, which illustrates the authors' strategy of "identifying the bright spots" - one of the ways you can "direct the rider". The charity had opened a one-person office in Vietnam in 1990 to fight malnutrition, but was only given 6 months by the government to prove itself. Jerry Sternin of Save the Children asked women in certain villages to collect information on the children in their villages. They found that some children thrived despite growing up in the same economic circumstances as everyone else. Their mothers were feeding them - hand-feeding them - smaller meals more often, and supplementing their diets with wild shrimp, crabs and sweet potato greens that they collected themselves. Save the Children could then create mothers' groups in lots of villages to spread the information. Six months later, 65% of the children in the original village were better nourished.